One cold winter day in January 2018, three domestic Muscovy ducks were discovered abandoned and left for dead, outside of a vacant residential property in Albion, Michigan. The humans whom they depended on for food, water and shelter had moved away and left the ducks behind. The ducks waited for them to return---not knowing of anywhere else to go. It wasn’t until three months after the family moved away that the neighbors realized the ducks had been left behind. They were spotted trying to collect the remains of fallen bird seeds underneath their bird feeder. It was clear that all three ducks were starving. The neighbors called All Species Kinship (A.S.K) and told them about the ducks, and who immediately came to rescue them.

Once rescued, A.S.K made an appointment for the ducks to see their avian veterinarian. Each duck received an overall health check, which included assessing their body condition, taking their weight, a physical exam and running a Complete Blood Count (CBC). All three ducks were underweight and dehydrated.

Two of the ducks---Benny and Rosebud, had already developed frostbite on both of their feet. Albion, the third duck, seemed to be okay. Although the presentation was very different between the two ducks, with Benny’s more severe.In addition to his feet, Benny was also frostbitten on his face. Muscovy ducks, being that their faces are bare and not feathered like other duck breeds, are vulnerable to frostbite on their faces. Benny’s carnucles (the bumps on the beak above the nares) were also frostbitten, as depicted by the brownish discoloration (which normally should be pink/red in color). 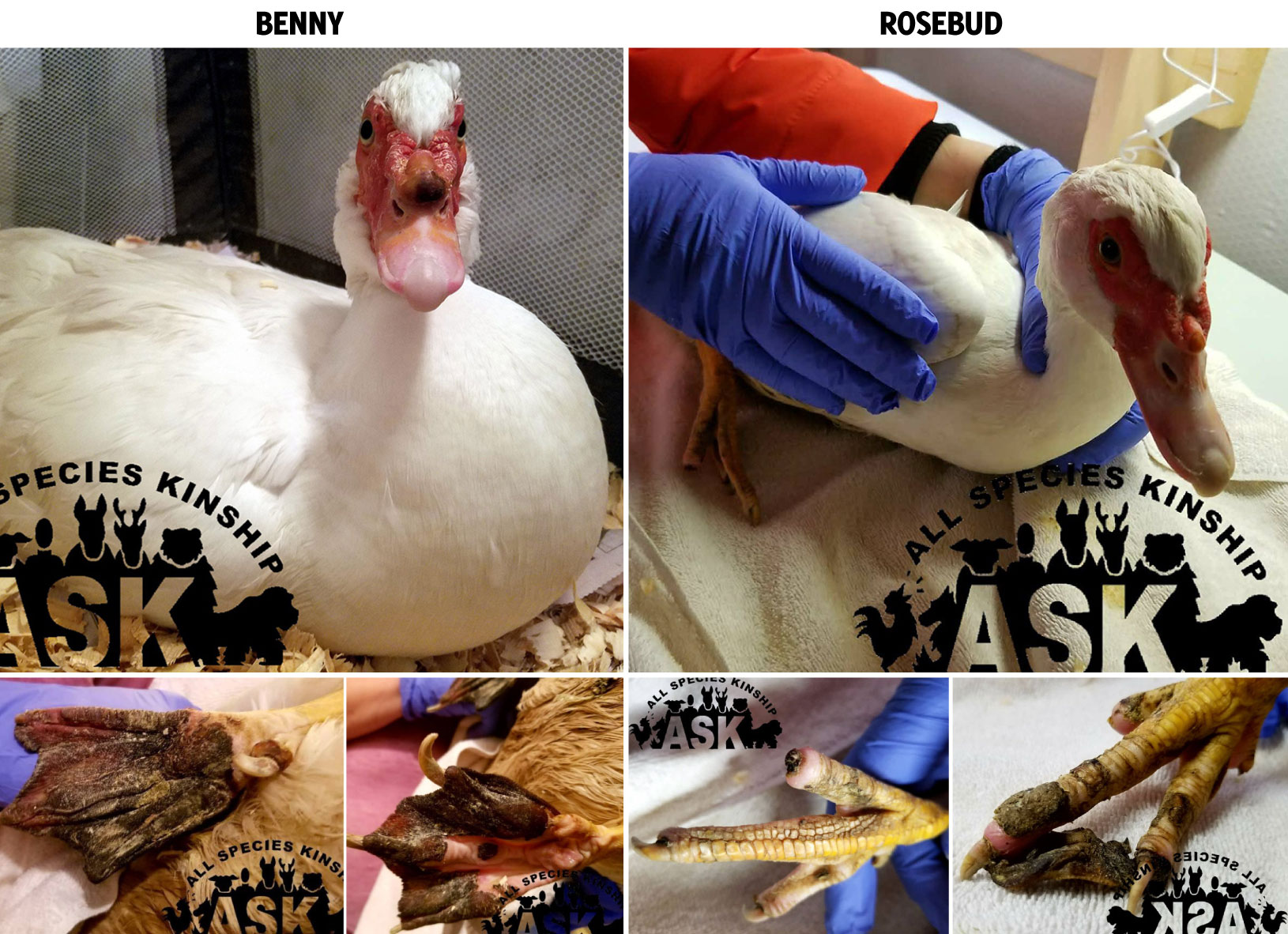 Since there is nothing you can do to stop frostbite, for the next several weeks, A.S.K did what they could to keep both Benny and Rosebud comfortable (hospitalization and supportive care), while waiting to see where the line of demarcation of viable and nonviable tissue would occur. 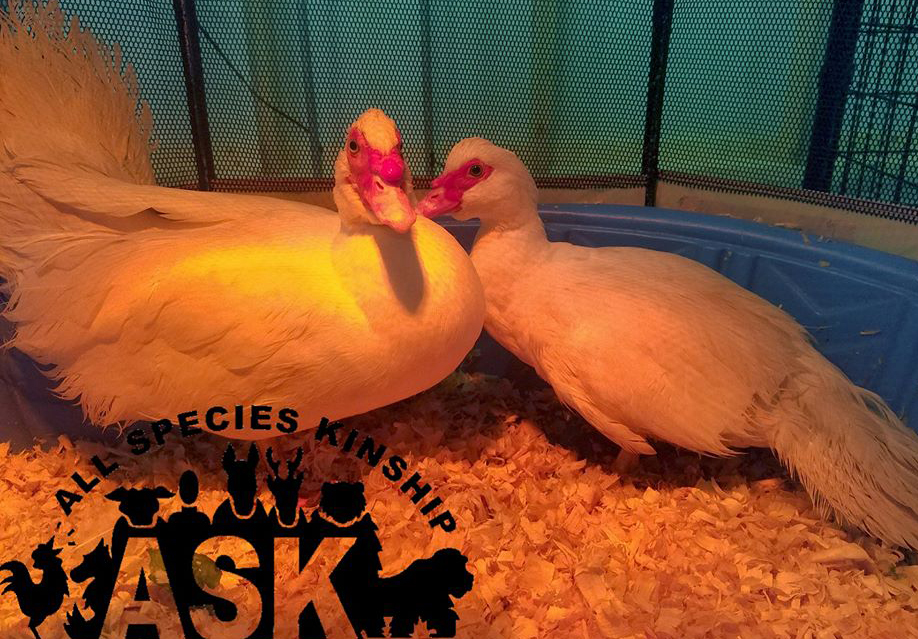 Benny and Rosebud in hospitalization together
In birds, it usually takes between 3 to 6 weeks for the line of demarcation to form as the dead, frostbitten tissue mummifies. Both ducks were given pain medication and antibiotics to help manage secondary infections and discomfort.

All three of the rescued Muscovy ducks were very fearful of humans, with good reason given their past history. None of the ducks were big fans of human contact, which unfortunately was needed during their rehab and recovery at A.S.K. As a vegan sanctuary, A.S.K respect the ducks’ boundaries, and never pressure any of them to act like companions. They are very respectful of their individuality and do not ever force human contact other than what is required for rehab purposes. 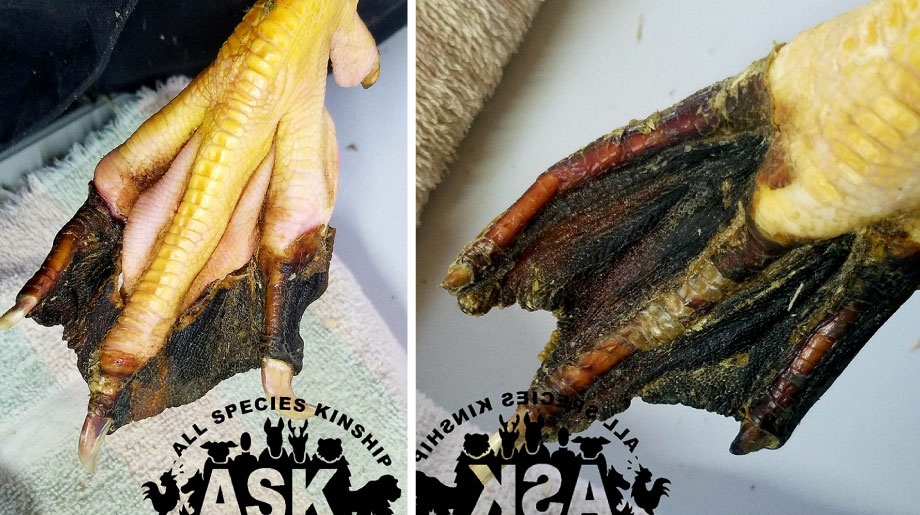 The line of demarcation beginning to form on Benny’s right foot (left photo) and on the more severe, left foot (right photo)
While undergoing rehab, A.S.K. started looking into options for how to go about managing Benny’s disability. They starting looking into the potential of the use of 3D printed prosthetics. They reached out to a board-certified avian specialist in a different state with previous experience with animal prosthetics and started talking to 3D printing companies about developing at least one 3D printed foot for Benny.

The process would be lengthy and require multiple vet visits and fittings. They would only fit a prosthetic for Benny if they thought it would enhance his quality of life, since sometimes they aren’t comfortable for the animal, and they want to make sure to do what’s best for Benny.

Although Rosebud’s frostbite was just as tragic, since it was not as severe and she still has a good portion of her feet left, she won’t need any 3D printed prosthetics. After several weeks of hospitalization, her feet healed without any secondary complications.

Sadly, although Benny’s feet were healing and not showing any signs of secondary infection, he suddenly showed a decline in behavior and appetite. A.S.K. started him on a different antibiotic, along with assisted gavage feedings. Four days later, Benny unexpectedly passed away. Although he remained wide-eyed and bright right up until the end, it was heartbreaking for A.S.K., especially when they thought about how the little duck never knew of a normal duck life.

Since Rosebud’s feet had healed from the frostbite, she was reintegrated with Albion, along with some new Muscovy duck friends! 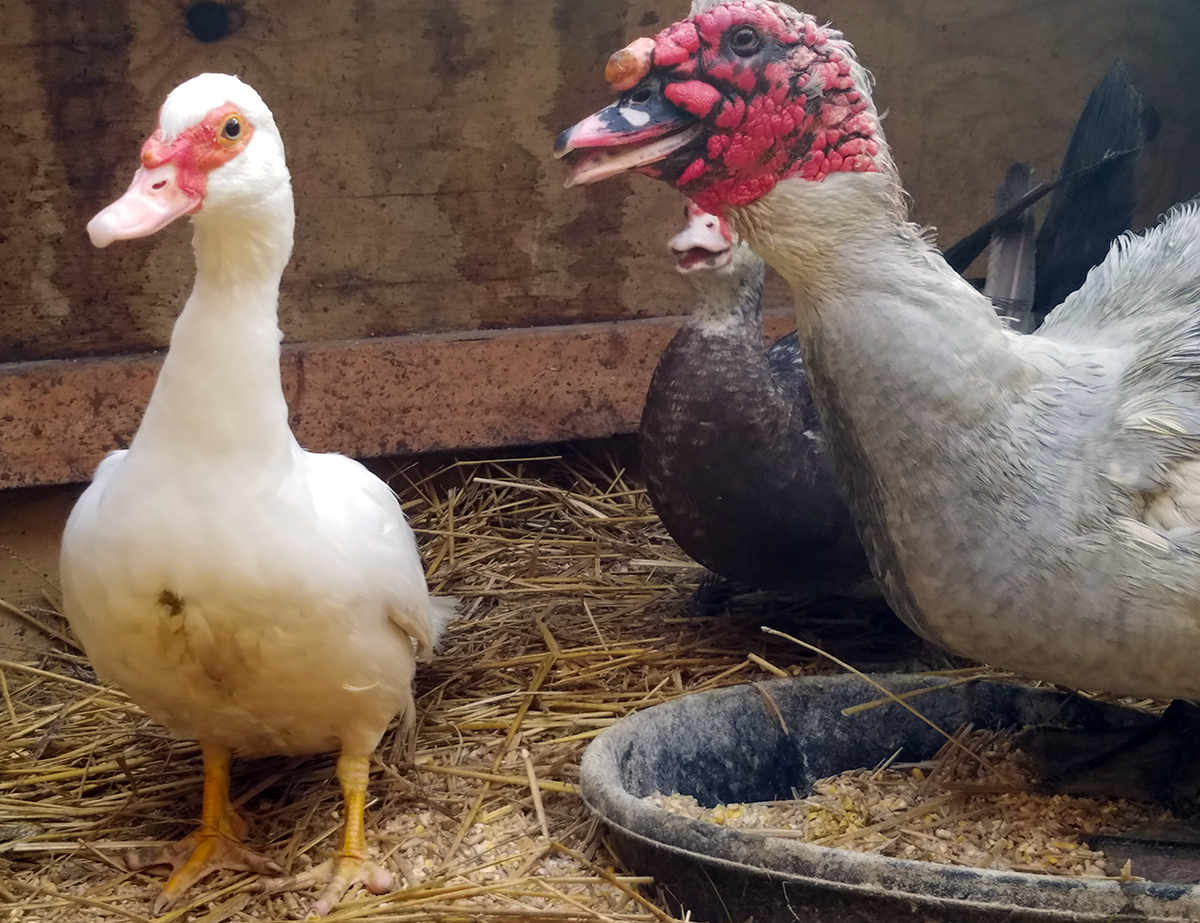 Rosebud with her new Muscovy friends
Although Rosebud moves on, she will never forget her dear friend Benny. In memory of Benny, please help A.S.K. spread awareness to others about the importance of protecting their ducks from frostbite----for they are not invulnerable to the effects of cold weather. Furthermore, abandoning ducks who were raised domestically by humans is not only an act of animal cruelty, it is also considered a crime in every state in the United States.

About All Species Kinship

All Species Kinship (A.S.K.) is a 501 (c) 3 nonprofit animal rescue and sanctuary located in Battle Creek, Michigan. They have been saving abandoned and abused animals from the neighborhoods of Calhoun County since 2001. All they had to do was drive down the Main Street to find dogs sitting hopelessly on the ends of chains attached to rickety wooden doghouses without even the basic comforts of straw insulation in the middle of winter. There they sat, as permanent lawn ornaments. These were dogs of underserved neighborhoods; animals were just an ill-fated extension to multiple struggles faced by their humans, and historically no attention was given to them by anyone. They were disregarded, overlooked and labeled as “fighting” dogs sitting on guard at “drug houses” “owned” by “unteachable” people. All Species Kinship (A.S.K.) set out to break stereotypes and change lives. Since then, A.S.K has expanded to also saving farm animals and wildlife throughout the state of Michigan.