Sophie is an adult Manky Mallard duck who was rescued by Victoria and her boyfriend, Beau, this past Summer. She was a victim of the cruel ‘duck dumping’ act. She now enjoys her days as a fifth member of the ‘Claverie Duck’ crew. The other crew members are Buttercup the Buff Duck, Sweet Pea the Welsh Harlequin, Bobbles the White Layer, and Rosie the Black Swedish. With Bobbles as the ring leader, the Claverie Ducks spend their days waddling around the enclosed backyard of Victoria and her boyfriend Beau’s urban residential home in southern California. When they aren’t waddling, they’re swimming in their duck pools, taking naps under trees, and enjoying plenty of cuddle time with their humans. Life wasn’t always mealworms and duck pools for Sophie though….

The Claverie Ducks
It was a cool August evening when Victoria and Beau first laid eyes on Sophie. After an afternoon of shopping in the city of Santa Barbara they decided to visit a nearby park. They stopped in and walked around Alameda Park, which is one of the city’s oldest parks. It consists of two blocks of lush greenery surrounded by dense city roads and buildings and mimics an oasis in the desert. Within the park sits a small pond, which is often occupied by wild ducks, turtles, and koi fish. 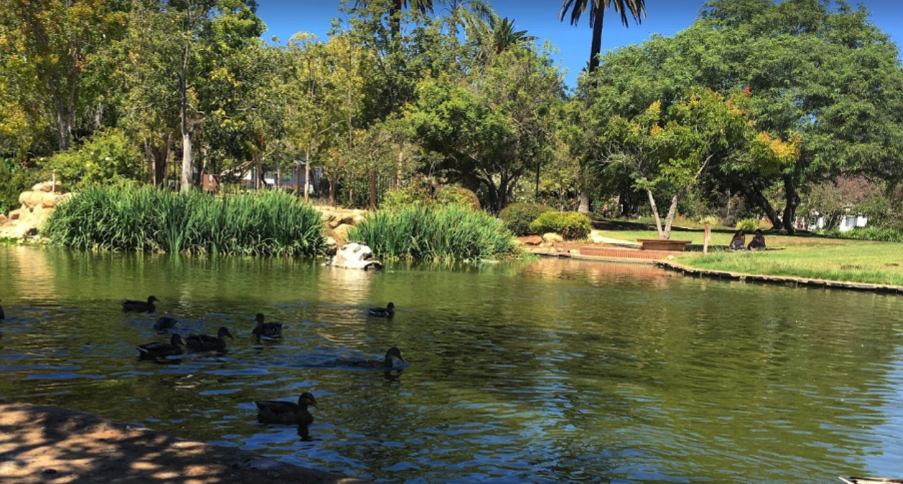 The pond at Alameda Park
That evening, when Victoria and Beau looked across the pond, there was something out of place about the scene. “On the shore right above the frolicking mallards was a black duck of a different breed, alone and asleep,” described by Victoria in her essay, ‘Sophie Forsaken’. It quickly became apparent that the small black duck resting off by itself was not a wild duck, but was in fact a domestic duck who had been dumped.

Every year, thousands of domestic ducks are abandoned - or according to the doltish people doing it, ‘set free’ - at lakes and ponds. Once they are ‘set free’, most are attacked and killed by wild predators or if female, raped and killed by a group of wild mallards. Others starve or freeze to death during the cold winter months. This is because you can’t take an animal that has been raised in captivity and taught to rely on humans for food, water, and protection and expect it to magically survive on their own. This is especially of birds that have been hatched artificially at a hatchery. A wild duck is taught how to survive in the wild by watching its parents. Ducks hatched at a hatchery do not have duck parents to teach them to survive. They depend on their human parents because their survival skills have been bred out of them for generations.

Victoria and Beau made several attempts to catch the small black duck, however she relocated to the top of a rock in the middle of the pond and successfully put an end to further attempts for that evening. Victoria and Beau left for the night and returned just before sunrise the next morning. Just as they’d hoped, the duck was still asleep and easy to capture. As soon as they got to the car, Victoria and Beau looked over the duck. They noticed her eyes were milky and grey, and she appeared to be at least somewhat blind. They immediately started calling nearby vets who would be willing to treat ducks and discovered the Cat & Bird Clinic in Santa Barbara. Victoria and Beau drove to their office and sat outside in the parking lot until they opened. The veterinary clinic was willing to squeeze in an appointment for the duck (who Victoria and Beau quickly decided to name Sophie). However, they requested that they drop her off for the day so that the clinic could squeeze her examination in between their scheduled appointments. 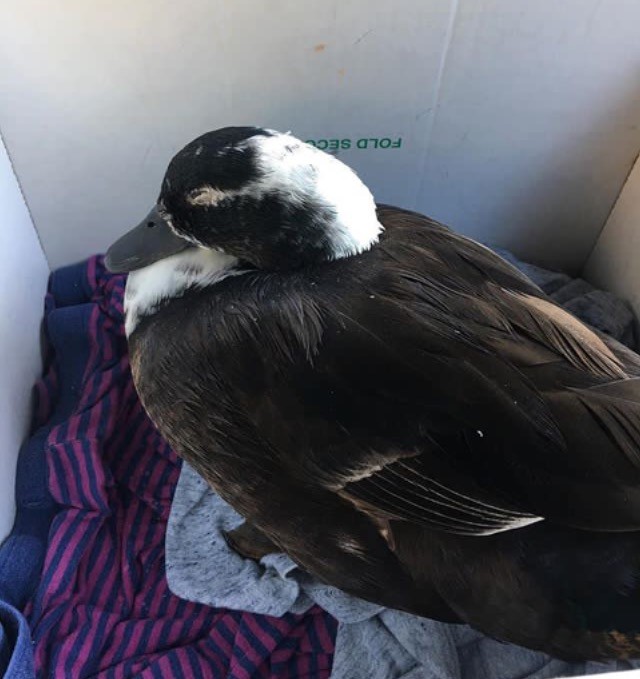 Sophie the day she was rescued from the lake

Late afternoon the same day, Victoria and Beau picked Sophie up from the vet clinic. At the appointment, Dr. Christine Sellers had weighed Sophie, checked her vitals, and performed a physical exam. Besides being underweight and malnourished, Sophie also had a long-standing eye infection in both eyes. Sophie was prescribed eye drops (Tobramycin Ophthalmic Solution) to be given twice a day for a week and a 7-day course of oral antibiotics (100 mg Amoxicillin tablets) to be given twice a day.

Victoria and Beau had also requested a fecal test be run on Sophie to make sure she wasn’t carrying anything that could be spread and cause harm to their four other ducks. Since the clinic had their own in-house lab, they were able to quickly confirm that that Sophie was parasite free, allowing for her to be able to be integrated with the other ducks.

A few days after having Sophie under their care, Victoria and Beau noticed that she had a slight limp to her step and saw she had a large bump over the distal (first and second phalanx) of her third toe. Victoria and Beau called the veterinary clinic and made another appointment for Dr. Sellers to see Sophie for her foot. They dropped her off again like before.

Dr. Sellers debrided the necrotic tissue from the infected wound in her foot (Bumblefoot) and sent her home with bandaged foot and antibiotic drops (Clindamycin) given in 1 ml doses, twice daily for 10 days. For the next several weeks to months, Victoria and Beau were instructed to ensure that Sophie’s foot remained clean and dry. To accomplish this, the couple kept her foot bandaged in vet wrap and duct tape throughout her recovery. 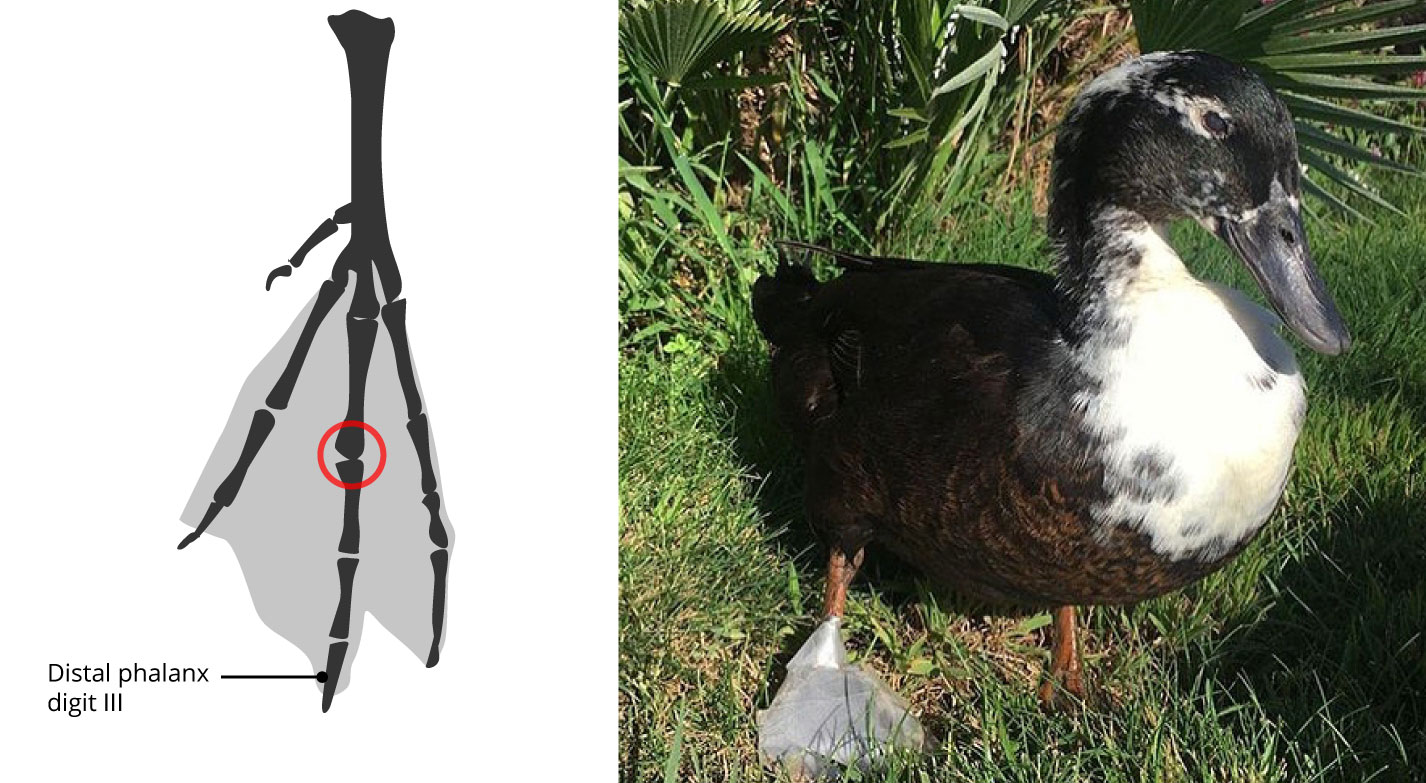 Where Sophie hurt her foot (right photo) and Sophie with her foot bandaged following her surgery (right photo)
Several months and two more Bumblefoot surgeries later, Sophie’s foot is almost healed. However due to the proximity of her infection to the bone in her toe, it has caused a slight deformity and a little ‘bunion’. She also walks with a bit of a limp. Unfortunately, Sophie is almost blind as a result of the eye infections, however Victoria and Beau continue to administer the eye drugs daily, and this treatment has helped prevent it from getting bad again. 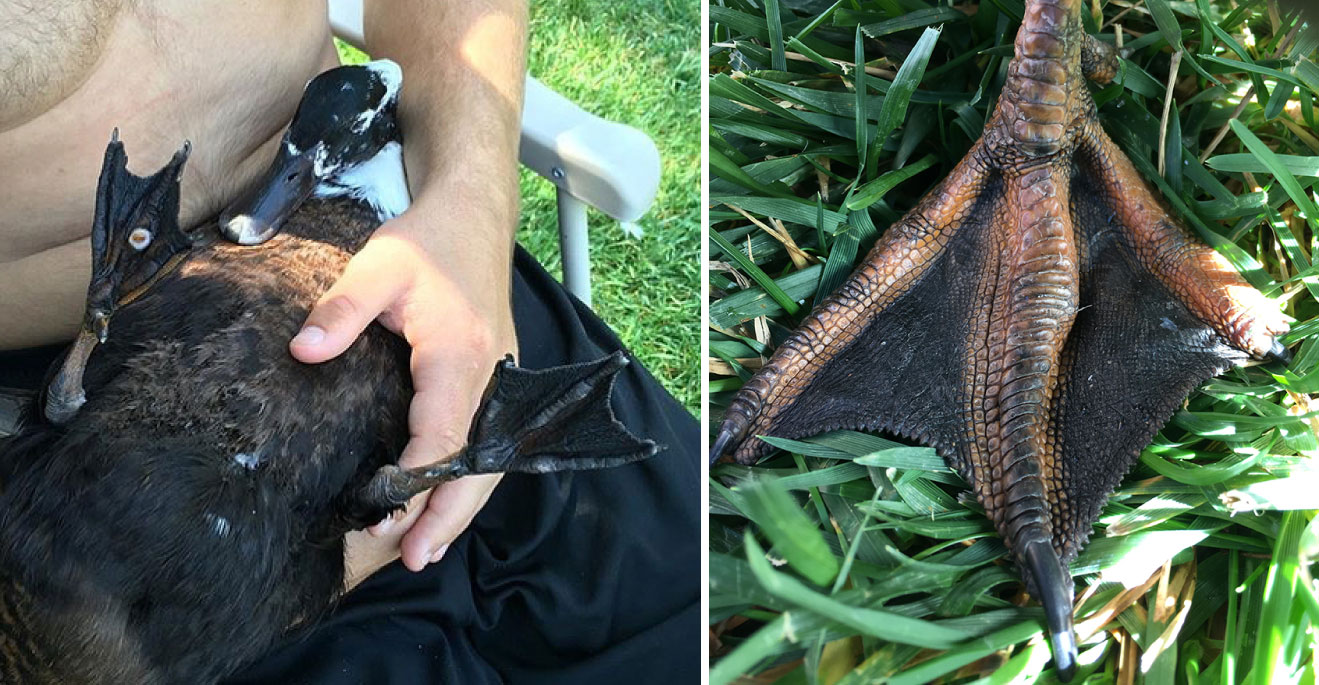 Sophie’s foot as of November 2017. Note the ‘bunion’ (left photo) and deformed middle toe (right photo)
Sophie quickly became friends with the other ducks. Interestingly enough, Sophie’s presence actually helped the flock get along better - another reason to consider adopting a duck! Before Sophie’s arrival, the four ducks didn’t always play nicely with one another. The bonded male and female were constantly picking on the two other females. However, when Sophie joined, the bullying stopped! Now all five members of the Claverie Ducks can’t stand to be apart from one another!

Although all of the ducks get along, Sophie’s best friend is Sweet Pea. Because Sophie is partially blind, Sweet Pea always makes an effort to remain by her side. When Sophie loses Sweet Pea, she quacks and Sweet Pea comes running to her. 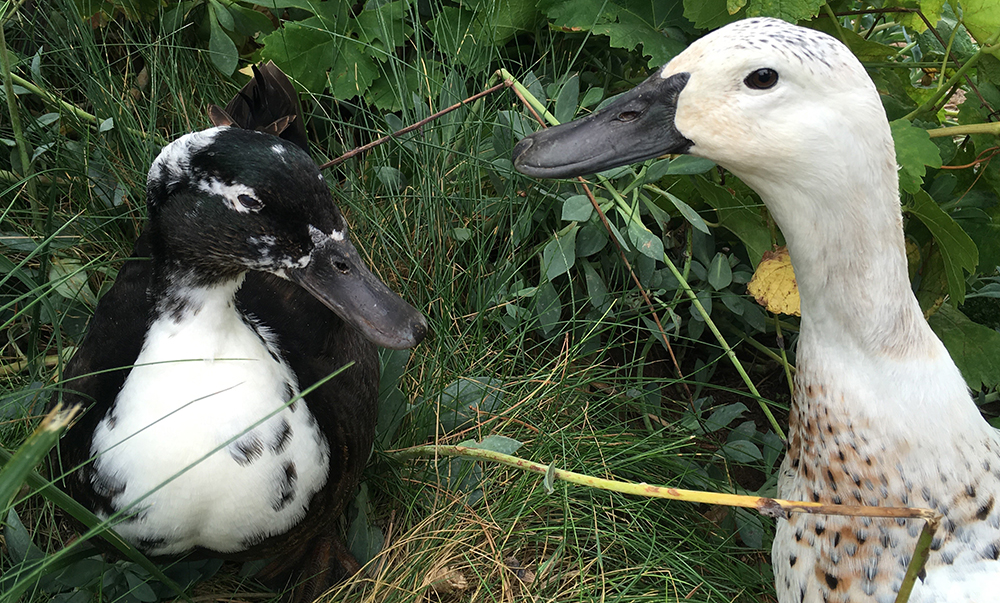 Sophie and her BFF, Sweet Pea

“Sophie was the greatest decision we’ve ever made, besides getting our original ducklings. Today she is happy and thriving! Sophie is my special girl; we have a really special connection. She's the smallest duck and my little baby. She loves having her head scratched and will go right to sleep. There’s nothing more special to me in the world than getting to hold her while she sleeps in my arms and nuzzles under my chin to get closer to me.”

Victoria and Sophie (left photo) and Beau and Sophie (right photo)
“More than anything we’ve learned that duck dumping is a very serious issue. Most of the ducks you see at ponds are not meant to be there, and many people don’t know that. Every day I look at Sophie, it makes me sad that we can’t save every duck, as unrealistic as that may be. But even more than that, it makes me angry that people still dump ducks, and many don’t get saved. Many suffer and just don’t make it and it’s a really heartbreaking reality.”

“Ducks are a huge, huge, responsibility and certainly not for everyone. They’re not as easy to care for as a cat or a dog and require a lot of attention and supervision. They’re really special animals, but people need to do their homework before purchasing this little life. People fail to think about the long term picture with a pet duck, and as a result, they are dumped.”


About the Cat and Bird Clinic

The Cat & Bird Clinic, located in Santa Barbara, CA, is a veterinary practice limited to the care of cats, birds and small companion exotics. The Cat & Bird Clinic was opened in July of 1992 and was previously known as The Cat Clinic for approximately 20 years. Our dog-free clinic provides a calm, quiet environment for your pets. Due to our focus on cats and birds, you will find the medical expertise necessary to meet the particular physiological and medical requirements of these unique species.