Snape is a black female Indian runner duck with a mild case of bumblefoot. She lives with two other ducks--Louise, and Waffles who are collectively referred to as the "Quack pack"!

Late one afternoon, Snape's owner discovered her limping in the yard. They looked at and felt along her legs and feet and didn't see anything obvious, so they decided to just keep an eye on it to see if it resolved or progressed. Soon after, Snape's limp was gone, however a hard lump appeared on the bottom of one of her feet. They weren't sure exactly what it was initially, for it did not fit the classic 'bumblefoot-like' appearance. However they later learned that the reason why was because it was actually the early stages of bumblefoot. Snape's owners initially tried daily foot soakings in a mixture of water and Epsom salt. Following the soaking, they applied a topical antibiotic cream and kept her foot bandaged and dry between soakings. They continued this course of treatment for about a month, however Snape's bumblefoot showed no signs of improvement. At that point, Snape's owners recognized that they should take her to see their local veterinarian.

Trip to the Veterinarian

Snape was taken to Rock Creek Animal Hospital for her bumblefoot. Upon examination, the veterinarians indicated that it was only a mild case of bumblefoot. They also pointed out that Snape's owner was good at keeping it clean and that was why the infection remained mild and did not worsen as it may have done otherwise. 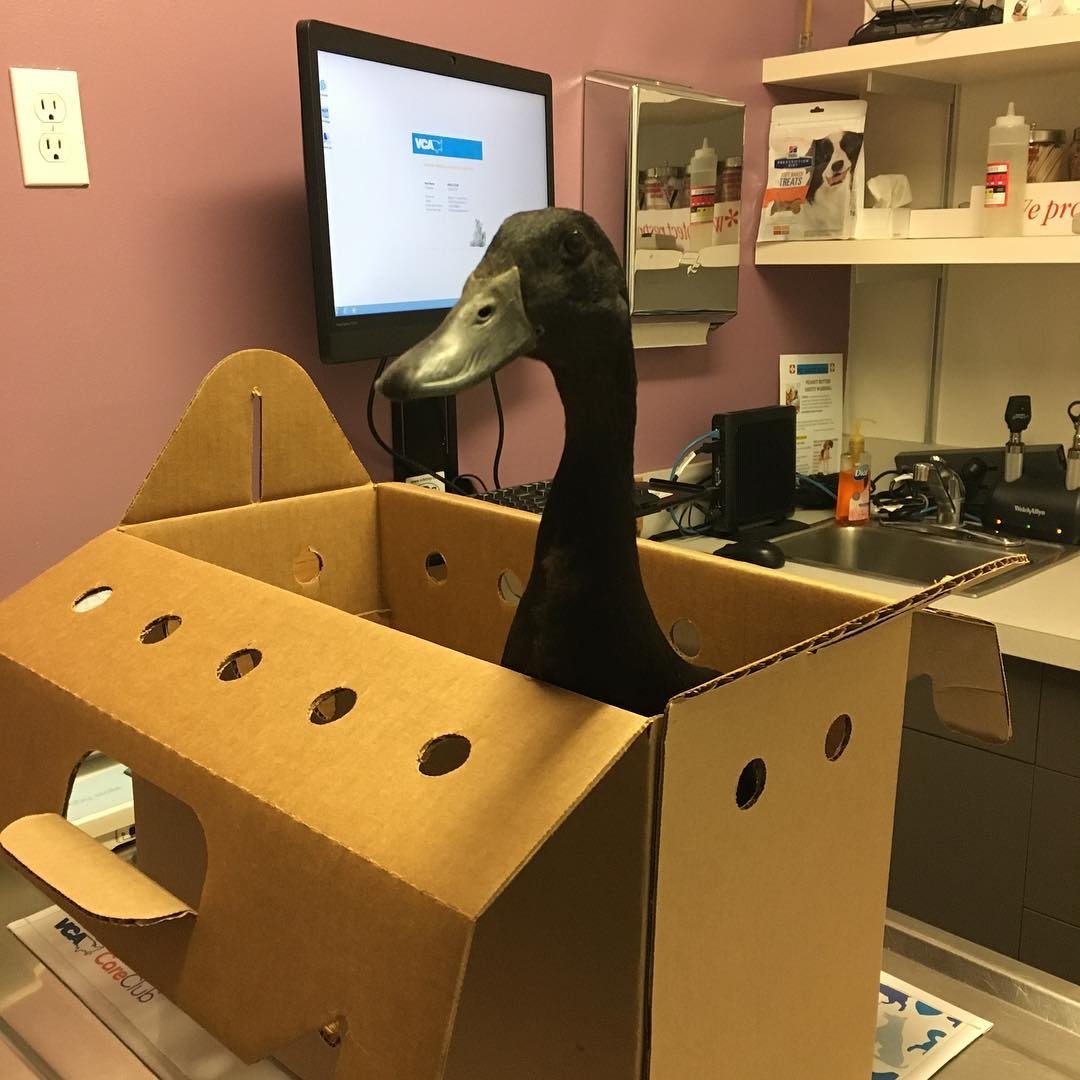 Snape at the vet's office
The hospital scheduled Snape in for debridement surgery, where they removed the infected tissue in her foot. In order to help her foot heal faster, the doctors needed to find a way to help redistribute the pressure exerted to that area of the foot. It had to be a light weight, padded material that could still allow her to walk around normally. To accomplish this, they cut off small pieces of a common pool noodle float to serve as orthopedic "doughnut-like" device as bumblefoot recovery footwear for Snape. Vetwrap was used to secure the pool noodles to her feet. Snape was discharged with anti-inflammatory medication and antibiotics, for her owner to give her on a daily basis for several weeks following the procedure. Since the surgery, Snape's foot has shown improvement and the orthopedic footwear seems to be working great!

Keep up with Snape and all her family's adventures by following them on Instagram @quack_pack!

VCA Rock Creek Animal Hospital is an AAHA-accredited facility that has provided veterinary care to people’s pets throughout the region since 1975. They serve the cities of Aloha, Beaverton, Hillsboro, and Portland. The hospital includes in-house laboratory facilities and is equipped with the latest surgical facilities and offers all forms of advanced veterinary diagnostic imaging equipment.