Puff is a 3 year-old Khaki Campbell duck who is an emotional support duck to her owner, Ashley Scott. Ashley suffers from a rare autoimmune disease which causes a great deal of pain and requires she receive regular medical treatments. Puff remains by her side and provides Ashley a great deal of comfort, support, and happiness.

Ashley and Puff
In late January, Puff had laid a couple abnormally small-sized eggs, and a soft egg. Ashley gave her some calcium powder/oyster shells which helped slightly. Then the evening of March 27th, Ashley noticed that there was something very wrong with Puff. She was acting very weak. Her appetite was normal, however she was not defecating. It became apparent that she was straining, for she started dragging her bottom on the ground, and arching her back like she was uncomfortable. 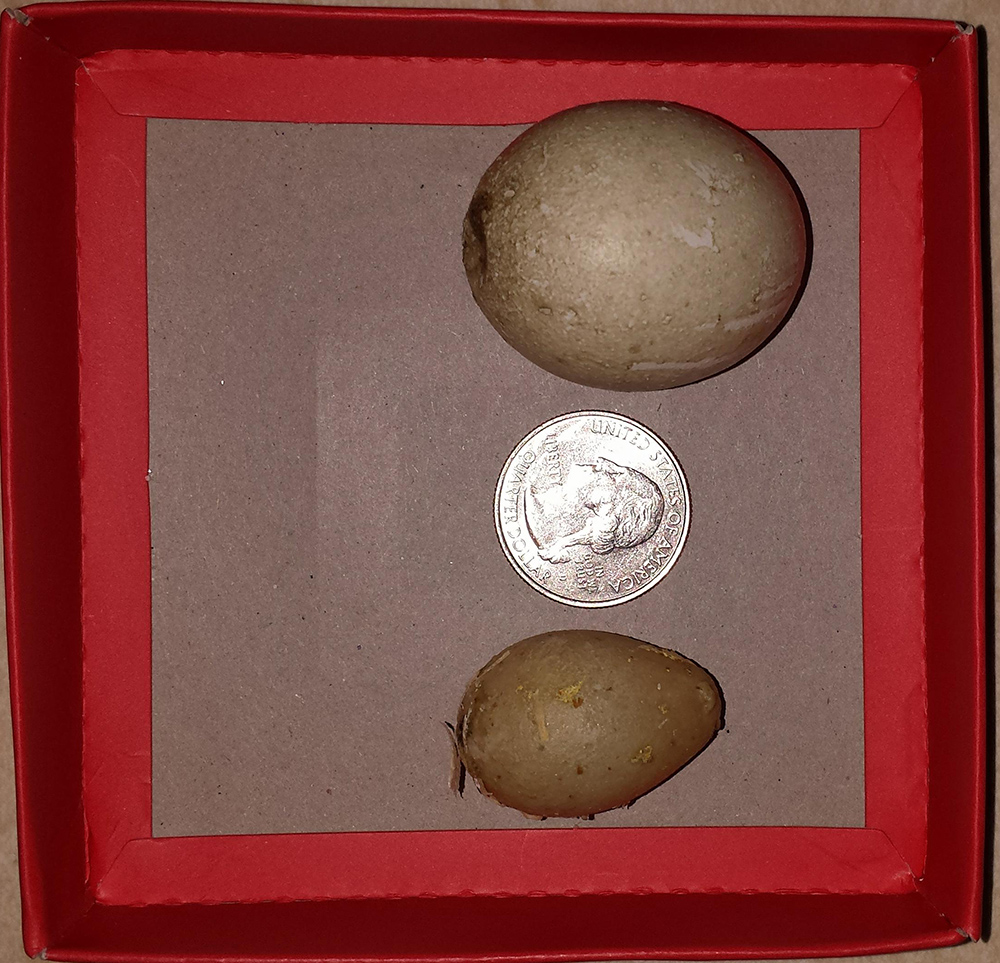 Some examples of Puff’s abnormally-sized eggs
Ashley suspected Puff was egg bound, and recognized that it was an emergency condition in which Puff needed prompt medical attention. She was familiar with the signs, since Puff had a history of egg laying related problems. About a year and a half ago in early June, Ashley went through a similar emergency situation with Puff.

The next morning, Ashley drove Puff to see their primary veterinarian. The physical exam revealed Puff had a flaccid moderately distended coelom (distended belly). A small egg was visible and palpable, which was moderately sensitive upon touch. Radiographs confirmed the presence of a small egg present in Puff’s distal coelom and a large amount of mineral density in her GI tract. 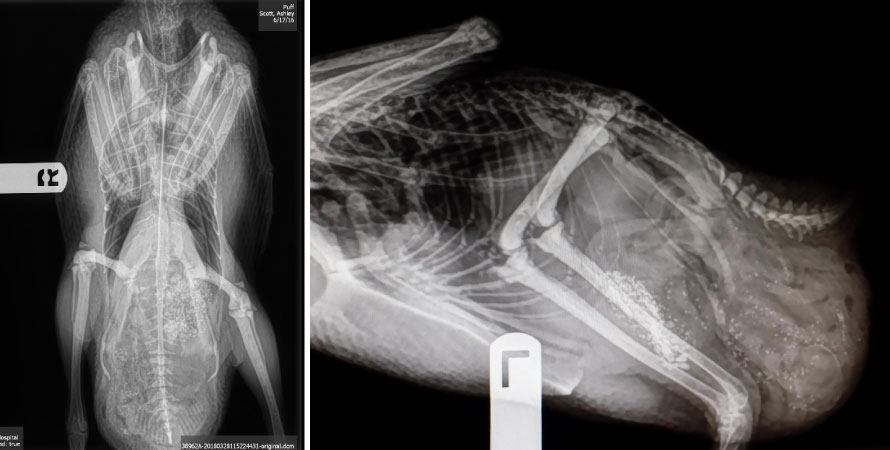 Puff’s radiographs
Puff was referred to North Carolina State University Veterinary College (which was a 5+ hour drive away). She was given oral meloxicam to help with the pain during her travel. 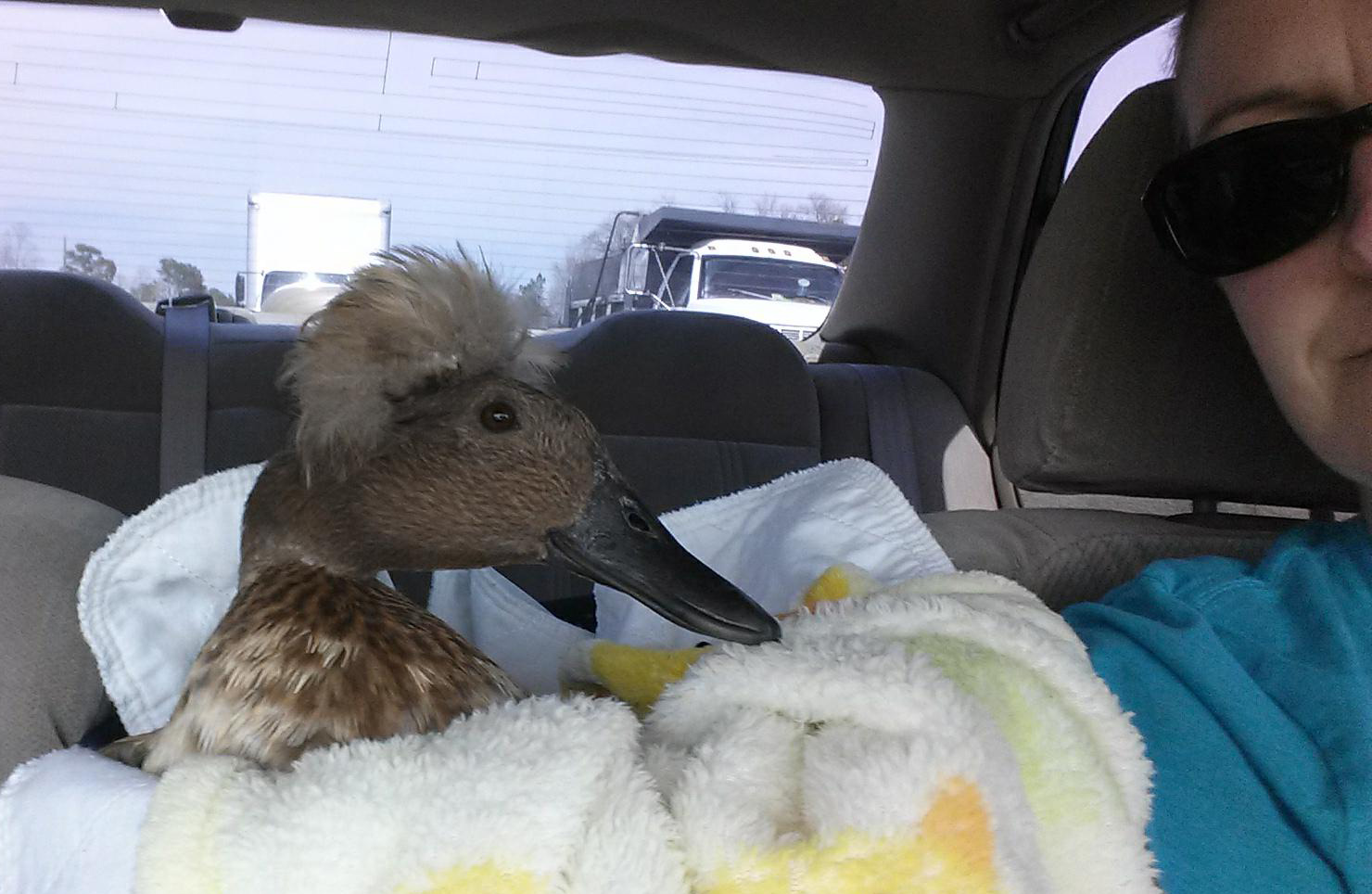 Puff and Ashley on their way to NCSU
Upon arrival that same evening, Puff was admitted into the NCSU Veterinary hospital, where she was kept overnight for close observation. She received round-the-clock intensive care, oxygen therapy, pain injections (butorphanol), and IV fluids. 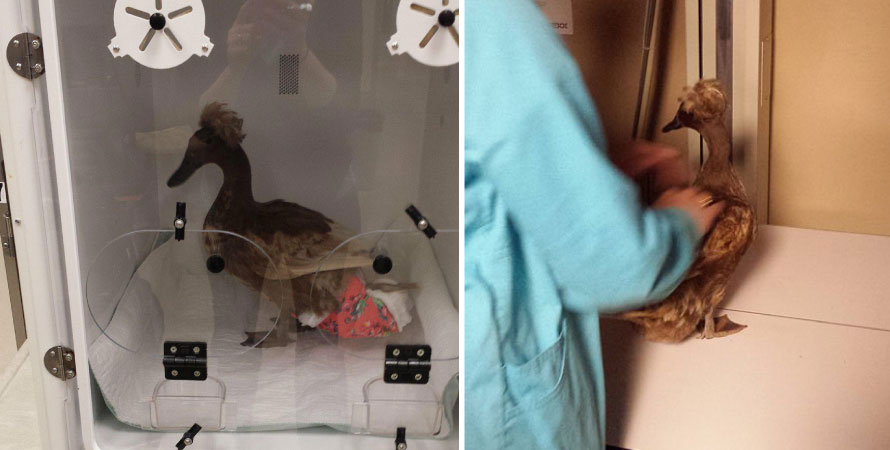 Puff hospitalized in the critical exotics ward at NCSU (left photo) and being examined by the doctor (right photo)
The doctors performed bloodwork, radiographs, and ultrasound to try to understand why Puff was in so much pain. Her bloodwork revealed no evidence that there was an infection or any organ dysfunction. The second set of radiographs showed a slightly mineralized mass in her caudal coelom (which is thought to be an abnormal egg), in a similar position as it was in the xrays previously taken by her primary veterinarian. It was also apparent that Puff’s reproductive tract was extremely enlarged and likely chronically inflamed.

An ultrasound was performed to try to help the doctors get a better understanding of what the mass was, however it didn’t provide any additional clarity other than it was likely located within the oviduct or it was just free within the coelom.

Puff getting whole body radiographs and quietly awaiting her examination
Although the doctors could remove the mass surgically, they were worried about the potential risks of the procedure to Puff. Since the mass was small enough for Puff to pass on her own (being if it was indeed an egg and within the oviduct), the decision to proceed without surgical intervention was made. Puff was administered leuprolide acetate, 400 mcg to help temporarily stop her from laying anymore eggs, and sent home with more pain medication. The doctors were also concerned about Puff being at risk for continued egg laying related problems, which would ultimately shorten her lifespan. They brought up with Ashley the possibility of treatment with hormone implants (Suprelorin ®, Virbac). 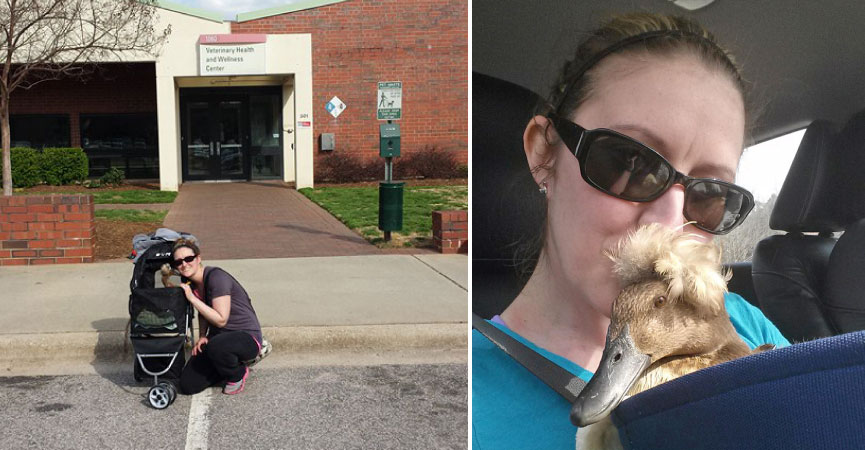 Puff and Ashley outside of NCSU and on their way back home
The very next week, Ashley scheduled an appointment with another veterinarian for Puff to get her first implant. Suprelorin ® is a subcutaneous implant containing deslorelin, a gonadotropine-releasing hormone (GnRH) drug. The drug is formulated in an implant that is designed to remain in place underneath the bird’s skin. After the implant is inserted, the drug is released slowly and continuously at low doses over time.

Shortly after receiving the implant, Puff began to molt her feathers, and Ashley noticed some changes to her 'quack'. Her appetite has increased and she is slowly regaining her strength.

Unfortunately, the unexpected medical expenses to save Puff’s life are quickly adding up and her family and friends want her to live a long and happy life. Any help you can give would be so greatly appreciated, more than any words could say. Click here to Donate.

About Puff the Duck

Puff is an emotional support duck. Her owner, Ashley Scott, suffers from a rare autoimmune disease that makes her very sick, and is constantly in and out of the hospital for treatments and often in lots of pain. She has to see a different specialist for every organ in her body. Puff provides Ashley a great deal of comfort, for despite the loud noise made by the nebulizer, she remains right by her side the whole time.