Puff is a two-year-old female Khaki Campbell who is certainly no ordinary duck! Puff is an emotional support duck for her owner, Ashley Scott. Ashley suffers from a rare autoimmune disease that causes her to spend most of her time in and out of the hospital. Also, every three weeks she has to get six-hour treatments at the cancer center in order to help boost her immune system. In the evenings, Ashley often has to undergo regular nebulizer sessions in order to help her breath. Puff provides Ashley a great deal of comfort, for despite the loud noise made by the nebulizer, she remains right by her side the whole time.

Ashley discovered Puff one day on a trip to the local feed store---during the ‘Chick Day’ event earlier that spring. She had noticed that one of the little ducklings was laying on her side and was getting trampled on by the other ducklings---she wasn’t even sure that the bird was still alive. Ashley alerted the store clerk, who picked up the little duckling who all of a sudden started moving a little. “What will become of the little bird?” Ashley asked the clerk, who told her that they would throw her out that night as it likely wouldn’t survive, and that it happens often due to the combination of being shipped in the mail and the stress of the environment. Ashley asked if they would let her purchase the duckling, however the store required that she purchase at least two ducklings, so Ashley also picked the runt of the litter, along with Puff. She named the little runt duckling Peep. Peep unfortunately passed away after a week and a half. When she died, Puff stayed by her sister’s side the whole time, and was found lying next to her and being very protective of her. From then on, Puff would cry if she was left alone. Ashley had to carry Puff around in a baby carrier on her chest to get her to stop crying. As a result, Ashley and Puff have a very strong bond with one another.

The Night of the Attack

One night in late November, Ashley and her husband had just arrived back at the house from eating dinner out---it was just a tad after 10 pm. Usually they were greeted with quacks of joy from Puff as she to Ashley to pick her up in her arms. However, this time was different. When they walked inside the gate to their backyard they didn’t hear Puff—or see her. As they continued on the path towards the back door of their house, Ashley spots Puff lying on her side along the bottom of the pool steps. Suddenly, she felt a burst of fear run through her body----as while she bent down to pick up the little duck, Ashley noticed that she was limp and her body felt cold to the touch. Looking down at her hands, Ashley noticed that they were covered in blood. 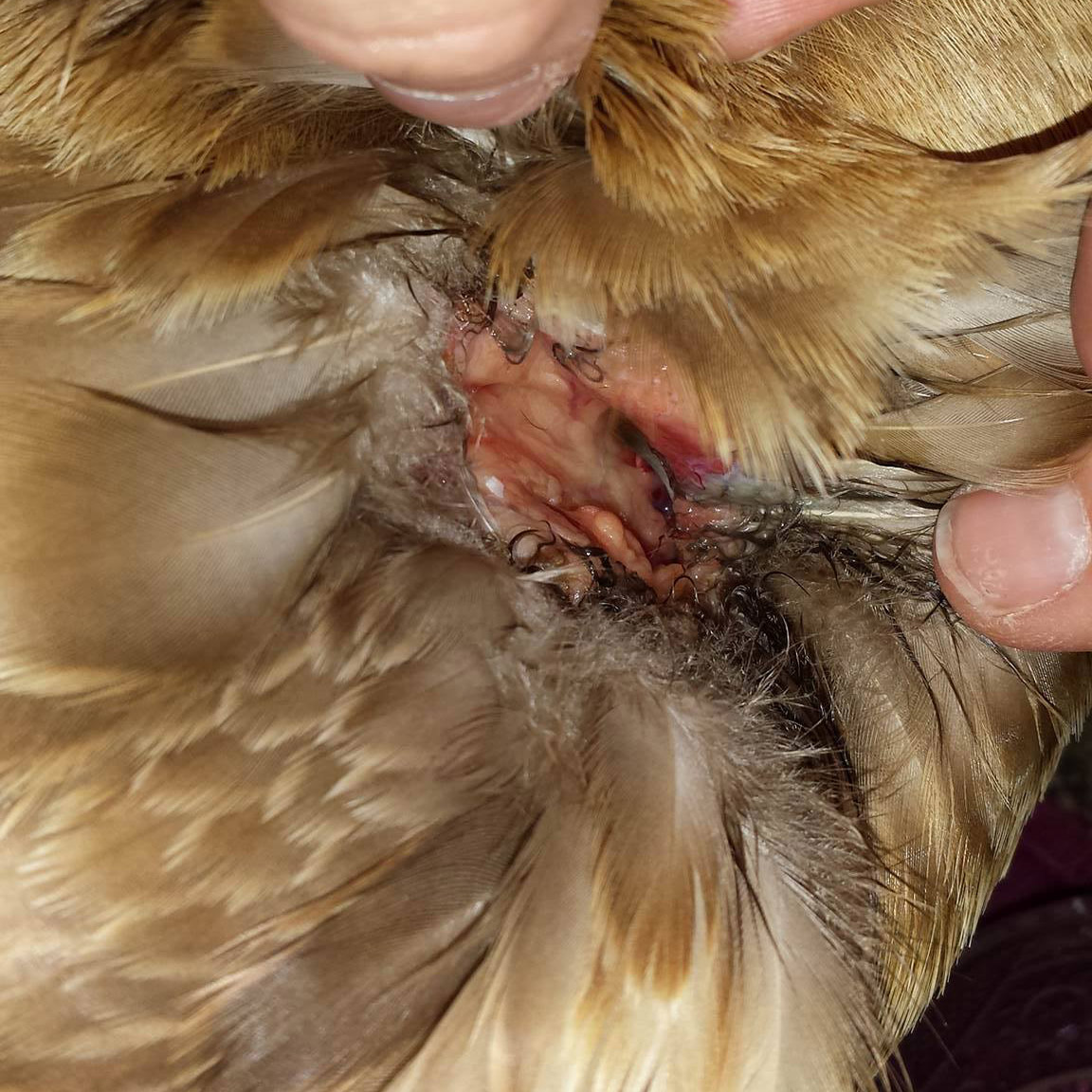 Ashley immediately rushed Puff inside and underneath a bright lamp to allow her to better inspect Puff’s body. Upon closer inspection, Ashley noticed a puncture wound on top of Puff’s head, a swelling along the right side of her face, and a large laceration on her right shoulder---the laceration was so deep that Ashley could actually see Puff’s heart beating. Ashley felt like she was living her worst nightmare---Puff was attacked by a predator while she in the backyard. Ashley suspected that Puff was likely attacked by an owl---being the time in which the injury occurred and the appearance of the lacerations, for it likely had tried to pick Puff up by the neck, resulting in the deep lacerations on her neck and chest. 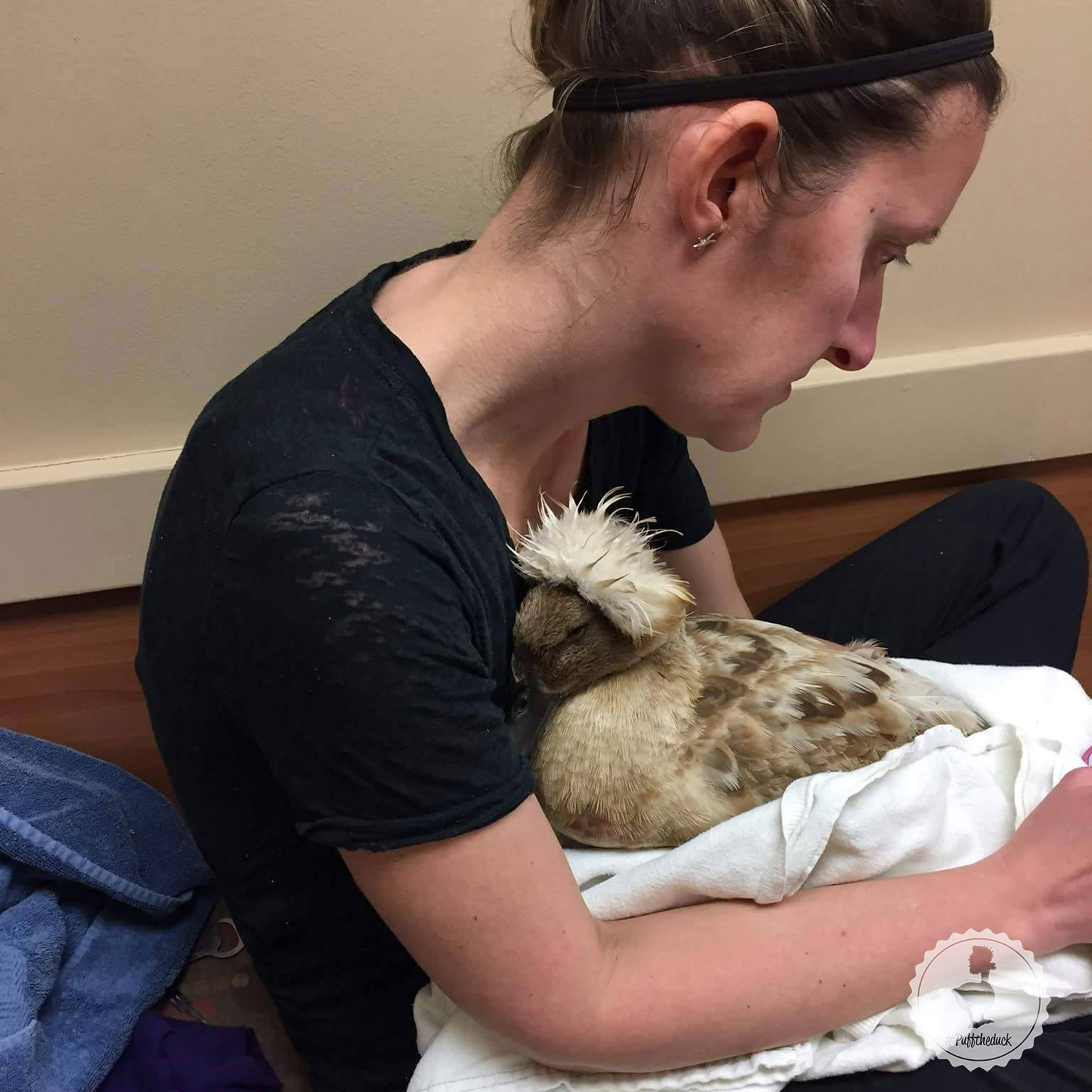 Ashley knew that she had to get Puff to a veterinarian as soon as possible---however it being so late, she wasn’t sure what to do. She decided that she would try the emergency line of the veterinary practice that she and her husband brought their dogs too. However, when she called the vet told her that they don’t treat waterfowl, and chimed in with words of encouragement---“If the duck makes it to the morning, it will be a miracle.” Ashley was in complete tears, and felt helpless, as she knew it would be impossible to find a vet that would be willing to work on Puff so late at night. So Ashley took Puff into her arms and laid with her in the sofa chair, rocking her to provide her some comfort---and to let the little duck know she was loved. As Ashley held her, she reminded Puff of the day when she first found her in the feed store---how strong she was then, and how she could survive this too—she just needed to hang on and not give up. 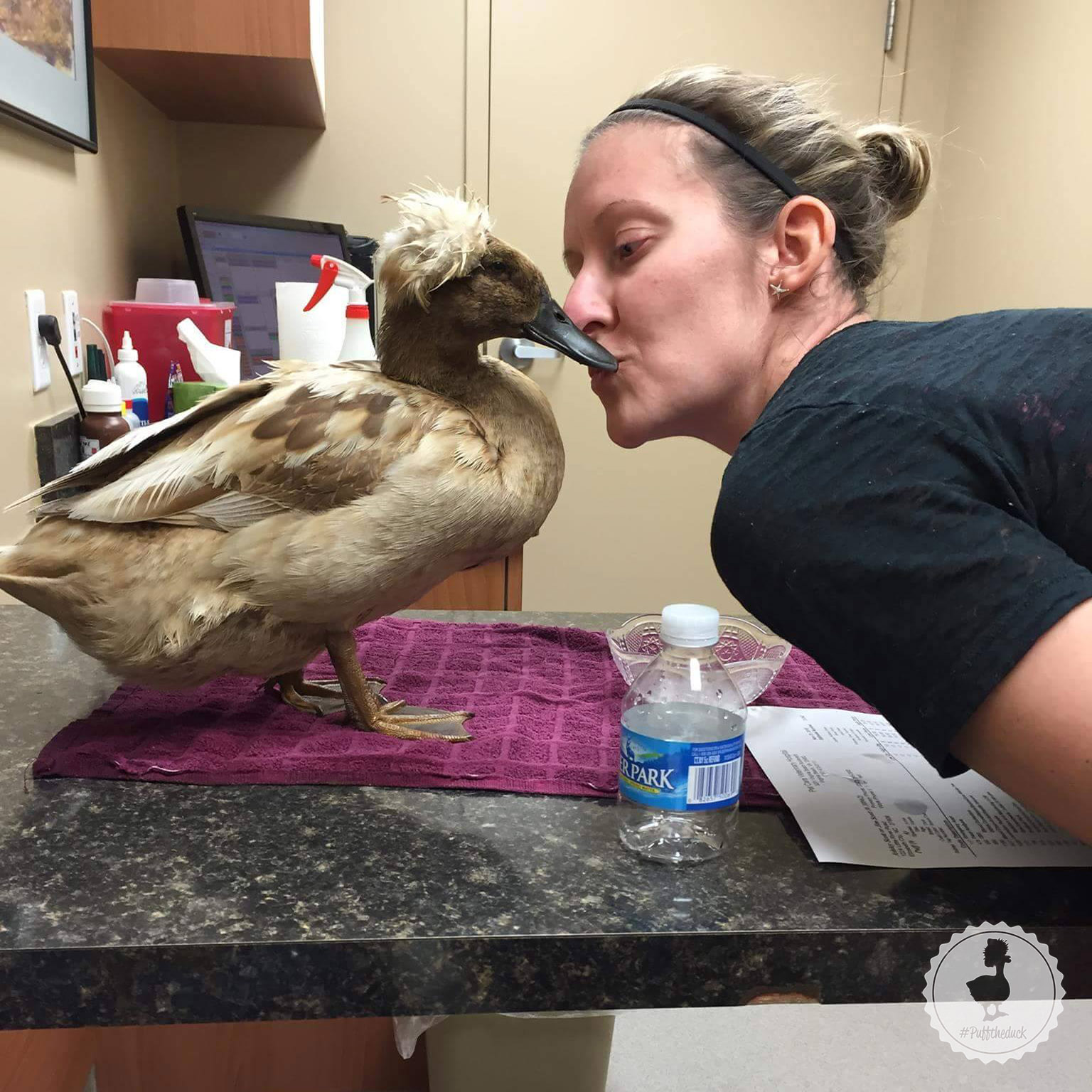 The next morning, Ashley drove an hour and half to bring Puff to the Pet Care Veterinary Hospital in Virginia Beach, in order to see Dr. Andrew Bean, who specializes in treating birds. Upon arrival, Puff was barely alive—as her breathing had become very weak. Dr. Bean admitted that he had never worked on domestic ducks before, as his usual patients were exotic bird pets—however that did not stop him from treating her. Dr. Bean first wanted to conduct an initial assessment on Puff, in order to understand her health status and how much stress she could handle (in relation to handling the anesthesia in surgery). To accomplish this, Dr. Bean first gathered some history from Ashley about Puff, followed by a physical exam and taking a sample of her blood to obtain a complete blood count (CBC). 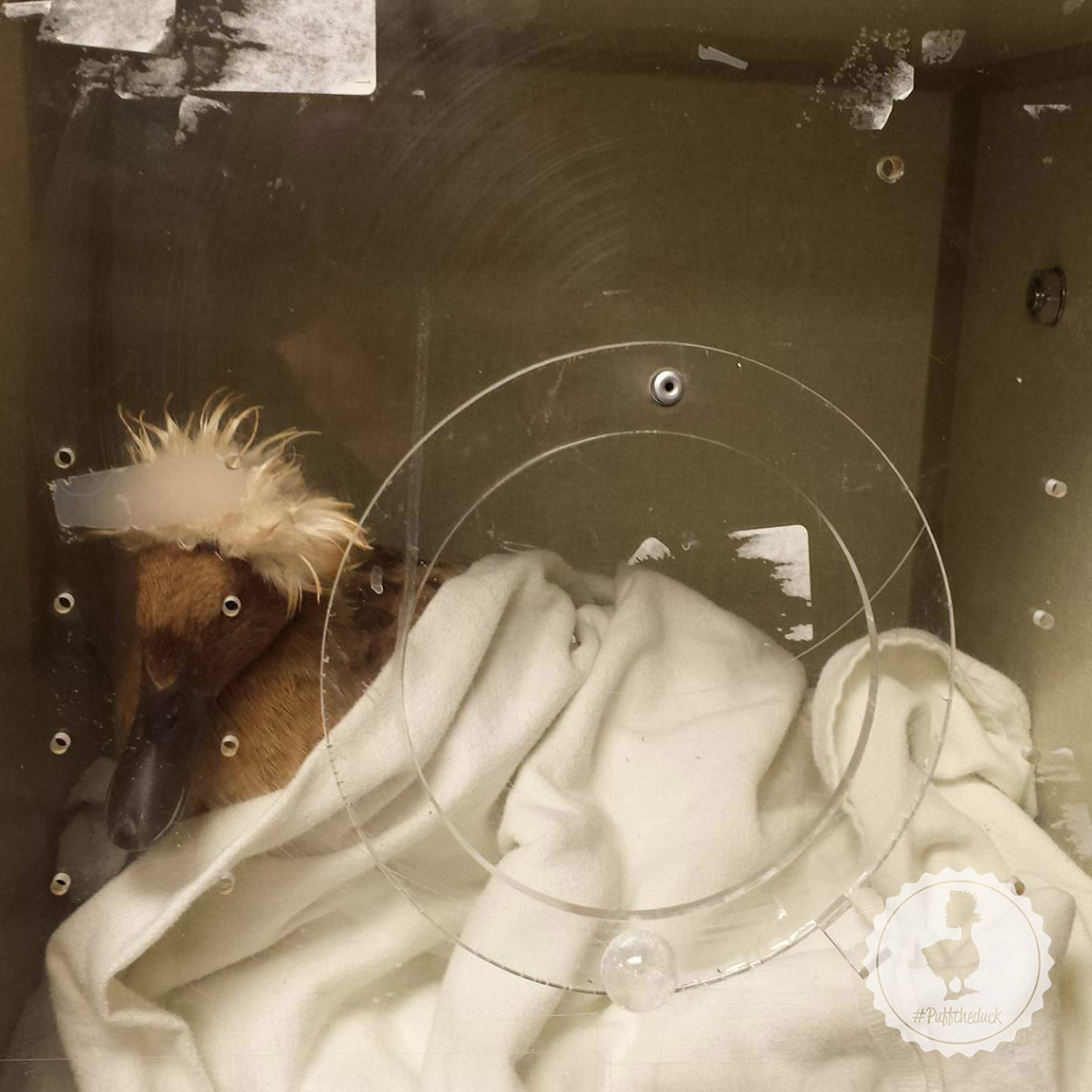 Following the results from the CBC and physical exam findings, Dr. Bean provided Ashley with his recommendations for next steps for treating Puff. He informed her that Puff’s prognosis was not looking very good and was questionable to fair, however he was willing to try his best to save her. Ashley eagerly approved and gave him her consent to proceed with treating Puff. Dr. Bean initially focused his attention on stabilization through pain control and oxygen therapy, prior to administering anesthesia for the surgery--which went well without any complications. Following the surgery, Puff was placed in a temperature-controlled incubator at 85°F (29.4°C) for warming treatment.

After a couple of hours of recovering in the warming cage, Dr. Bean checked Puff’s health status and confirmed that she was ready to be discharged. However, prior to leaving, he first wanted to go over Puff's discharge instructions with Ashley. Puff's prescribed treatment consisted of the following medications, that needed to be administered to puff every 12 hours for 14 days: 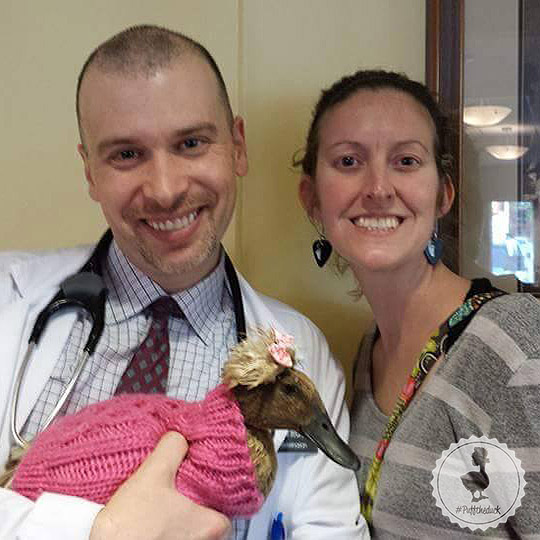 When Puff was brought back to Dr. Bean for her follow up appointment, he found that her injuries had fully recovered and that Puff seemed to be back to her old self. He shared with Ashley how he thought that it was the bond she and Puff had together, that helped her stay alive and fight through the night. Ashley and her husband wanted to make sure that Puff was never again at risk of an owl attack---or any predator for that matter. They made sure to never again leave Puff outside in their backyard without a person being there too. Ever since Ashley taught Puff how to swim in their outdoor pool, she enjoys floating around and keeping up with Ashley whenever she decides to swim! Whenever the Scotts' have to go out, without Puff coming along, they either put her up inside the house, in her play pen, or outside in their predator-proof outdoor enclosure. However, Puff usually goes with Ashley wherever she goes, for in addition to helping provide emotional support for Ashley, Puff is also great company and always entertaining!


About Puff the Duck

Puff is an emotional support duck. Her owner, Ashley Scott, suffers from a rare autoimmune disease that makes her very sick, and is constantly in and out of the hospital for treatments and often in lots of pain. She has to see a different specialist for every organ in her body. Puff provides Ashley a great deal of comfort, for despite the loud noise made by the nebulizer, she remains right by her side the whole time.

Dr. Andrew Bean was born and raised with two brothers and two dogs in Minneapolis, Minnesota. He began his pre-veterinary coursework at the University of Minnesota, and was accepted into the University Of Minnesota College Of Veterinary Medicine in 2007. Following graduation, Dr. Bean completed a one-year internship in small and exotic animal medicine and surgery at Valley Animal Hospital and the Reid Park Zoo in Tucson, Arizona. He then relocated to San Diego, California, where he worked as a small and companion exotic animal veterinarian in both general and emergency practice settings. Dr. Bean joined Pet Care Veterinary Hospital in Virginia Beach, VA in 2014. 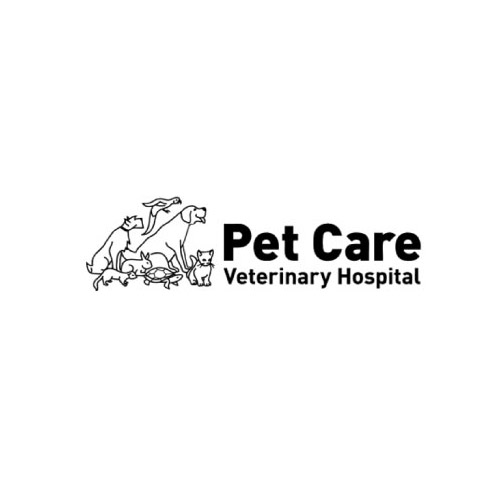 Pet Care Veterinary Hospital has been providing compassionate, state-of-the-art preventative, diagnostic, and surgical veterinary care for the Norfolk, Virginia Beach, Chesapeake, Suffolk, Portsmouth, Williamsburg, and Newport News area since 1984. They are AAHA-accredited and employ advanced technologies and procedures, including digital radiography, ultrasound, acupuncture, and dentistry as well as routine examinations and vaccinations.