Hope is a two-week old Pekin duckling who Tammy refused to give up hope on. While she was growing within an egg, Hope spent the majority of her time under Pumpkin, a broody hen. The last couple of days, she was relocated to her mother’s nest. However, on day 28, Tammy noticed that her mother left the nest—along with the egg for almost the entire day. As she picked up the egg she realized that the duckling had already started piping. She managed to quickly set up an incubator and placed the egg inside so she could finish hatching. 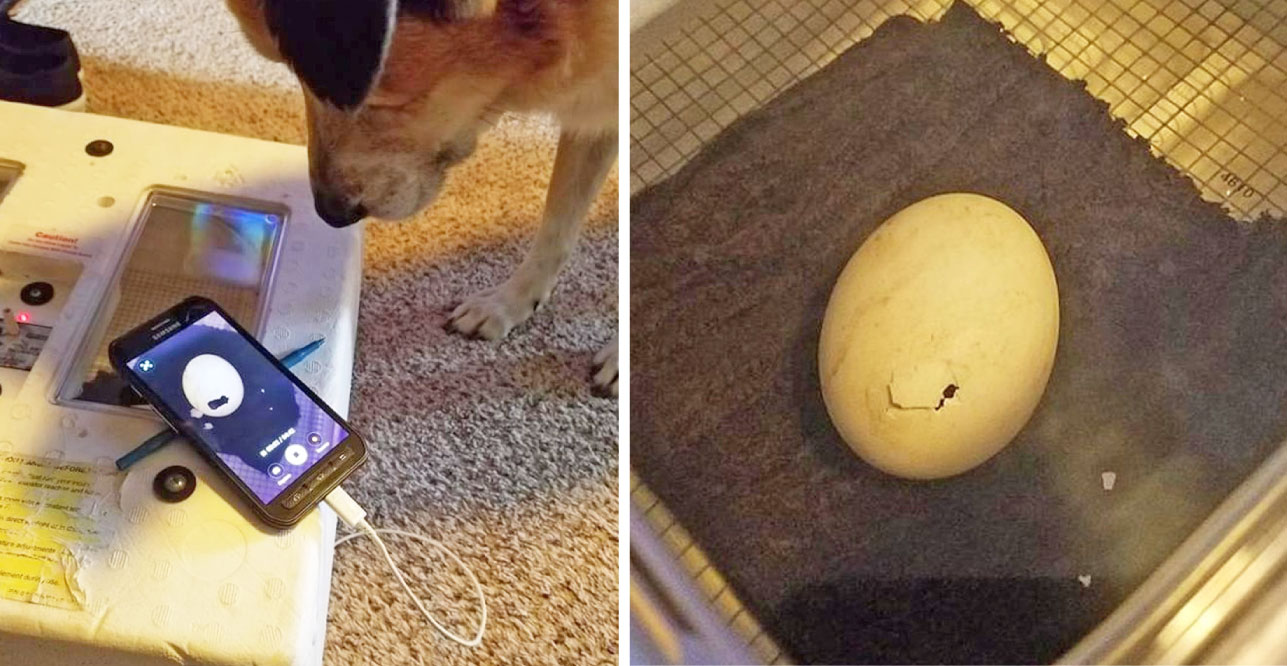 Hank keeping a watchful eye over Hope as she starts to hatch
Thankfully Tammy wasn’t alone that evening, her girlfriend Carrie was there too, as she stayed next to the incubator to monitor the duckling’s progress. They also stayed communicated with their friend Steph remotely, who had previous experience assisting with a ducklings hatching, which is why Tammy had reached out to her when she knew Hope was ready to hatch.

Hope was rocking the egg quite a lot in an attempt to get herself out, but after several hours, she still wasn’t able to get herself out of the egg. So Tammy tried to help her by carefully peeling away tiny pieces of the outer layer of egg shell, while keeping the inner layer containing the blood vessels intact. She then placed the duckling back in the incubator.

(Left Photo) Hope hatching from the egg and later wrapped in a damp cloth (Right photo)
Four hours later, Tammy and Carrie checked on the duckling’s progress and noticed that she had managed to get her leg stuck behind her head and couldn’t get out of the inner layer. They peeled everything away except for the bottom portion which contained the remainder of her yolk sac. Since this portion also appeared to be drying up, they placed a clean damp cloth underneath to help keep this area moist. It was 11pm. Tammy and Carrie thought it would be best to let her rest, and went to bed.

At about 3 am, Tammy woke to check on Hope in the incubator, and to her horror she saw blood and yolk all over the incubator. She inspected Hope and noticed a bloody mass on her stomach. Tammy was frantic with worry for she wasn’t sure what this mass could be. She asked Carrie when she woke, who also wasn't sure.

Hope’s hernia
For two days Tammy and Carrie stressed over what they should do and what it could be. During this time, they made sure to keep the area clean with Betadine and set up a heat lamp to provide her warmth. The duckling was active and alert, and eating and drinking fine. Tammy figured that perhaps the mass was simply the remains of the yolk sac, and that it would eventually dry up and fall off. Then it started to smell bad.

Tammy called their veterinarian, Northside Pet Hospital, and made an emergency appointment for Hope. Upon arrival to the vet hospital, Dr. Krista Carlson examined Hope’s belly and revealed that the mass was actually a hernia. Dr. Carlson carefully removed the majority of her hernia and tied the remaining portion off. She sent Tammy and Carrie home with medication and instructions for at-home care for Hope.

Hope on the way to the vet (left photo); Dr. Carlson treating her patient (right photo)
For the next 7 days, they soaked Hope’s hernia in a chlorhexadine wound wash solution diluted with warm water, twice a day and applied Silver Sulfadiazine Cream to the hernia between soakings. To minimize any risk of a secondary infection, they had to try to keep the hernia as clean as possible. To accomplish this, they set Hope up in a tote lined with puppy pads. They couldn't use bedding until the hernia fell off. It was also important that they try to keep Hope from preening the area, so Tammy created a mini battle armor vest for her using a plastic cup and a soldering pen. 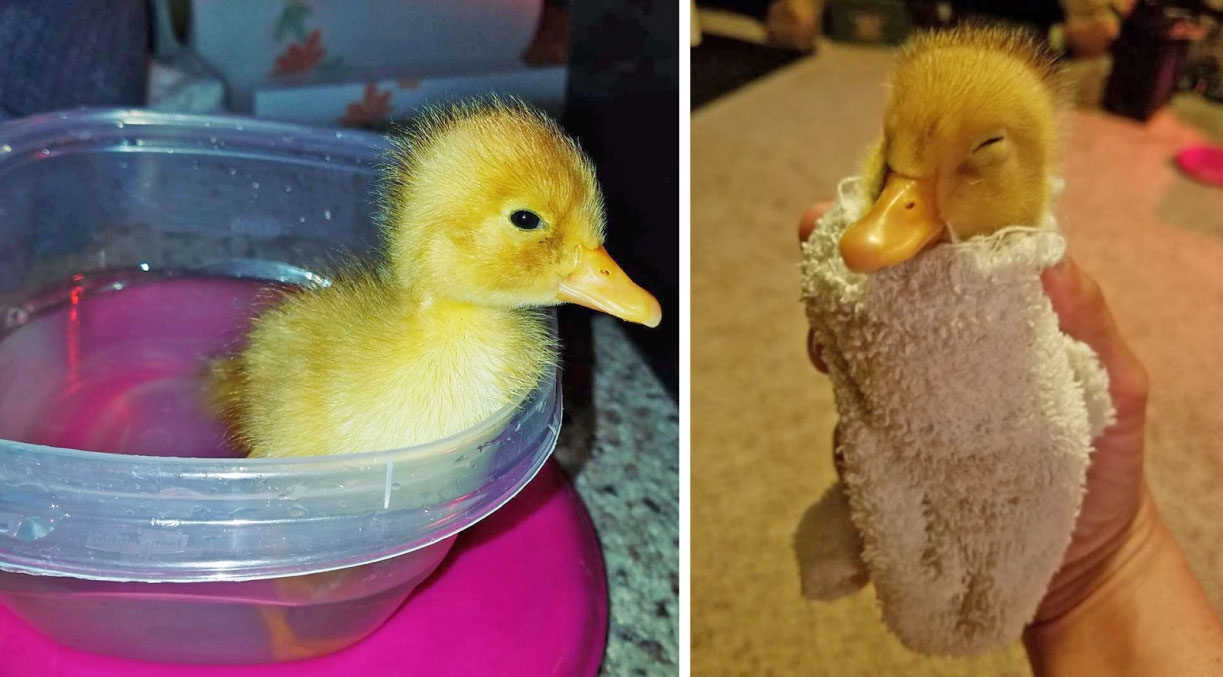 Hope receiving her daily medicated soak
Five days later, Hope’s hernia fell off (which is what was supposed to happen). Two days after, Tammy and Carrie returned to the vet hospital with Hope for her follow up exam. During the exam, Dr. Carlson examined Hope’s body to make sure that her belly button was sealed—everything looked great!

Hope is doing great and is now over 2 weeks old. She enjoys playing with her good friend Hank, who is a very gentle dog who is a lover of all animals.

Tammy’s Advice to Others

“My only advice to other people in this situation is don't give up on a duckling or chick right away if they haven't consumed their yolk sac or if something doesn't look right on their belly. Everything I found online said imminent death and to put it out of its misery for they will never survive. Hope is living proof that even though they are very vulnerable little creatures, they deserve a fighting chance because they just might surprise you.”

Northside Pet Hospital is a full-service veterinary medical facility located in Eau Claire, WI. The hospital was founded in 1987 by Dr. David Menard, who specializes in exotics, ultrasound, and alternative therapy. The hospital is fully equipped with an in-house diagnostic laboratory. The practice treats a wide range of animal species—including dogs, cats, birds, ferrets, rabbits, pocket pets, and reptiles.