Daffy and her brother, Padme came to the Caglayan family when they were but a few days old. They are both Aylesbury ducks that were born July 4th, 2013, to a local poultry breeder in the town of Aylesbury, which is located in Buckinghamshire, England. Aylesbury ducks are a breed of domesticated duck that became very popular in Aylesbury, Buckinghamshire in the 1800s where they were predominately used for meat production. Aylesbury ducks are known for their large size and exceptionally tame personality. They have pure white feathers, white skin (which is a unique attribute to this breed, as most other duck breeds have yellow skin), orange feet and legs, dark grayish blue eyes, and an unusually long, straight pinkish-white bill.

The Caglayan family lived out in the country in Aylesbury, and had recently built a small pond in their backyard and kind of liked the idea of having ducks in the garden. The family had zero experience raising ducks, but had always loved animals and wanted to give it a try. Mr. Caglayan and his daughter had a particular interest in having pet ducks, and Mr. Caglayan thought it would be great activity for him and his daughter to do together. So the next thing the family knew, they had a pair of adorable ducklings living in their backyard. For the ducks, this was equivalent to duck heaven---green grass, a beautiful pond, protective shelter, and a loving family to care for them. They soon grow to become full size adults, who enjoyed time in the pond and hanging out in the grass. However, as it was only Daffy and Padme as a pair, Daffy, being a female was frequently chased by Padme, which is only natural for male ducks to do. The downside to this is that it can predispose ducks to developing bumblefoot.

The Caglayan family grew very fond of the ducks, and they considered them as part of the family. All was well until one day the family had visitors over, and when Mr. Caglayan picked up Daffy a guest noticed a large black lesion on the bottom of one of her feet. Being inexperienced with ducks, Mr. Caglayan took to the internet and ended up coming across BackyardChickens.com (BYC), an online forum used by backyard poultry owners who collaborate with one another about various issues that they might be having with their birds. Mr. Caglayan posted an image of Daffy’s foot on the forum and received feedback from various members that they suspected it looked a lot like a condition known as bumblefoot.

Instead of attempting to treat the condition on his own, Mr. Caglayan scheduled an appointment with his local veterinarian, Dr. Oliver Watson (“Dr. Oliver”) from Companion Care Aylesbury. He had thought that by taking Daffy to Dr. Oliver, that it should be a quick and easy fix. However, Mr. Caglayan quickly discovered that there was no real quick and easy fix for bumblefoot, especially when it has progressed past the initial stages. Over the course of the next 10 weeks, Mr. Caglayan went through many different methods of treatment in an attempt to heal Daffy’s bumblefoot.

The first treatment for Daffy’s bumblefoot consisted of Dr. Oliver debriding the central core of the bumblefoot lesion (essentially, opening up the site and removing the hardened pus area) in Daffy’s foot. There was however, not much of a core to remove, but Dr. Oliver did the best he could, and followed with thoroughly cleansing the site (accomplished through repeated flushing of the recently debrided area with iodine solution). Following surgery, Daffy was put on a prolonged course of antibiotics (Clindamycin hydrochloride) that were to be topically applied to Daffy’s foot twice a day. Daffy’s foot also needed daily wound management. For wound management, Dr. Oliver recommended that Daffy’s foot be flushed twice a day with iodine solution 2.5% (500 ml) per ml, and kept bandaged in between wound flushings, in order to keep the foot clean. He also recommended that Daffy should try to keep weight off of the foot. 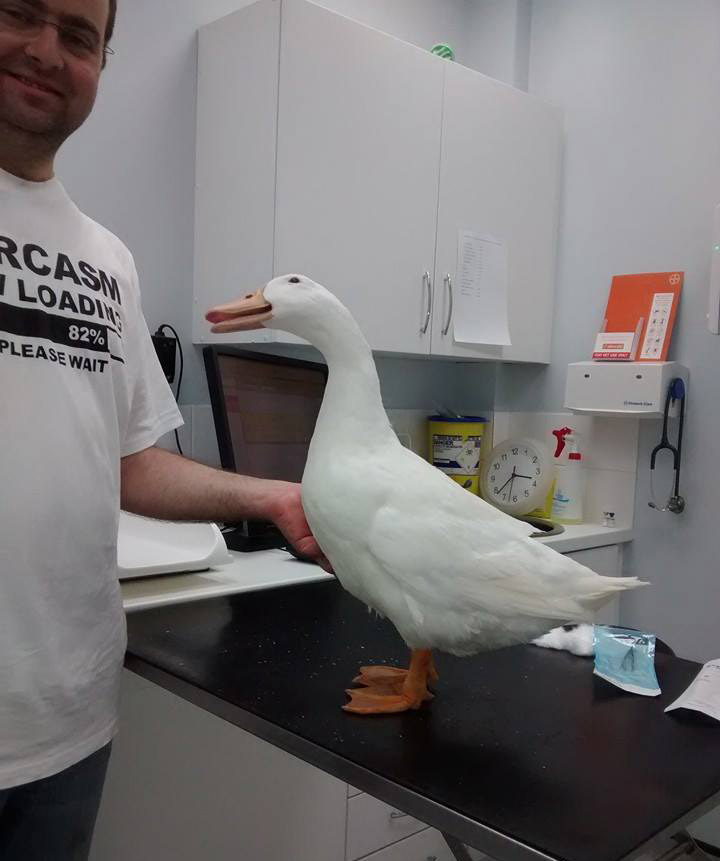 Daffy at Dr. Oliver's office
At the same time, following advice from others on BYC, Mr. Caglayan also performed several Epsom salt soaks throughout the day, in 10 minute intervals. The only complication with the wound management for Daffy was that Mr. Caglayan was not shown how to wrap Daffy’s foot, and with what materials to use. Therefore, he wasn’t aware that he shouldn’t use plaster (Band Aid), and to be conscious about not bandaging Daffy’s foot too tightly. The unfortunate result was that one morning, upon unwrapping the bandage on Daffy’s foot, Mr. Caglayan noticed that part of the foot web was discolored and turning a purple color (instead of the normal orange color). Mr. Caglayan rushed Daffy to Dr. Oliver who explained that Daffy’s foot had been bandaged too tightly, which reduced the flow of blood supply to the area which resulted in damage to the affected tissue. Thankfully, the tissue did actually recover for the most part, and eventually turned a pink color. This was not however the case with the bumblefoot.

Round Two of Treatment

Mr. Caglayan asked Dr. Oliver about what might be other options for him to treat Daffy’s bumblefoot. The next treatment consisted of a one-week course of oral antibiotics (Baytril), Synulox Palatable drops, and Synulox RTU (Amoxicillin Trihydrate, Clavulanic Acid) injections directly into the bumblefoot lesion that were administered by Dr. Oliver at his clinic. The result was that the bumblefoot did actually start shrinking, and they carried on with the injections. However after several weeks of treatment, despite the continued daily injections, Daffy’s bumblefoot lesion came back with a vengeance. Dr. Oliver suggested that he take some radiographs of Daffy’s feet, to confirm that the infection had not spread into the bone. Thankfully, the infection had not yet spread to the bone. Dr. Oliver also took a swab of the material within the lesion and sent it off to a veterinary diagnostic laboratory for a bacterial culture and sensitivity analysis, in order to determine the specific bacteria that they were dealing with and what antibiotics it was susceptible too. The results of the test indicated that unfortunately, the bacteria in Daffy’s bumblefoot lesion was discovered to be a high resistant strain of Staphylococcus aureus, and was resistant to most antibiotics, hence why the bumblefoot returned even after the earlier treatment---as they administered antibiotics did not have any effect on this particular strain of bacteria.

Referral to an Avian Specialist

Dr. Oliver decided it was time to refer Mr. Caglayan to an avian specialist—Dr. Neil Forbes from Great Western Exotics. His practice was located about a two-hour driving distance away from the town of Aylesbury. So Mr. Caglayan scheduled an appointment with the specialist for Daffy. Dr. Forbes advised that he could treat Daffy’s bumblefoot, but that it would require more extensive debridement of the lesion, however required general anesthesia and close monitoring of her during the surgery. Mr. Caglayan was provided an estimate of about £750 (US $1260) for the entire procedure. The Caglayan family decided to go forward with the procedure for Daffy. Following the surgery, Daffy was put a course of Amikacin, which were one of the two specific antibiotics that the bacteria was not resistant to, as determined in the laboratory test results that Dr. Oliver had confirmed previously. After a week following the surgery and course of antibiotics, Daffy’s bumblefoot had finally healed.

Both Dr. Forbes and Dr. Oliver also recommended that some changes be made to Daffy’s environment, to help minimize the chance of the bumblefoot returning in the future. In order to minimize this risk, the Caglayan’s completely drained and scrubbed down the pond with F10. They also covered all the edges of the pond (which had previously consisted of paving stones) and lined any rough or sharp areas with Astroturf.

Unfortunately, although Daffy’s bumblefoot did not return, she ended up sadly passing away in November 2015 as a result of a complication of pneumonia. It was an unusually cold early winter morning when the Cagalayan family noticed that Daffy was not acting herself, and was having difficulty breathing. They quickly called their vet and explained to him how Daffy was acting. Dr. Oliver switched his schedule around and was able to see Daffy in two hours. However, sadly it was time that Daffy did not have, and she died while the family was waiting at home.

Daffy was a very special duck, and the Caglayan family loved her dearly. She was a joy to be around, and her happy quacks would always bring a smile to their faces. Daffy was also quite smart, she would always find a way to swim to the other side of their pond, even when there was netting put up to separate it off. For some time, nobody could figure out how she was doing, then one day they set up a video camera on the pond that recorded her for several hours, so that she could try catch how she was doing it. This worked like a charm! The footage revealed that Daffy was ducking and swimming under the net and actually pushing herself against it, underneath the water—she was quite a crafty duck! The footage also showed that while Daffy was perfecting her prison break, Padme would quietly sit in the enclosed part of the pond watching in surprise!

So that Padme would not be alone, the Caglayan family brought him friends, and added two new ducks to their flock, which they had thought were females, in which they were named Zoe and Lola. However, the ducks were later discovered to be males. As years went by, Padme ended up sadly passing. Lola and Zoe remain and are as happy as ducks can be, although unfortunately bumblefoot continues to be an issue, however this time the Caglayan’s new to keep an eye out for early signs of its development, and were able to catch it in during the early stages—making it much easier to treat.

Keep up with the Caglayan family’s duck adventures with Zoe and Lola on their Instagram account @aylesburyduckdaddy123.

After qualifying from the Royal Veterinary College University of London, Dr. Oliver Watson completed his Washington and California State Board examinations and North American Veterinary Licensing Examinations. Upon completion, he practiced veterinary medicine in the United States for a short period of time before relocating back to his hometown in the UK, where he has remained for several years. Dr. Watson's practice is Aylesbury Companion Care.

Great Western Exotics is a tier 3 RCVS accredited avian and exotic animal referral hospital located in Swindon. They offer 24/7 emergency care for veterinary professionals as well as routine first-opinion consultations for pet owners 7 days a week. Their team employees several full-time staffed specialists and is headed by a European and RCVS recognized Specialist in Avian Medicine.